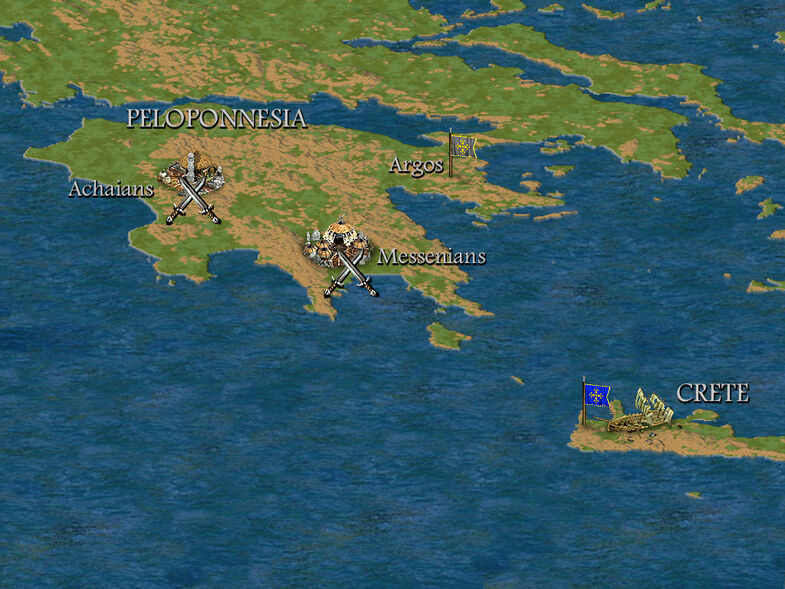 Pelops and his fleet are ambushed by a Minoan fleet. Just in time, before a Hurricane sinks both Pelops' and the Minoan ships, Pelops, three of his sons and a few surviving peasants manage to reach a small island. They must prepare for the journey north as their temporary safe haven is not quite as safe as it appears.

In Greek mythology Pelops was King of Pisa in Peloponnesia (not to be mixed up with the town Pisa in Italy). After emigrating from Anatolia, which connects to the first Scenario in the campaign. Peloponnesia means "Pelops' Island".

Attention: Do not read this if you want to solve it on your own

On the Minoan Island Edit

Despite all of Pelops' urging, you actually have exactly one hour to prepare for your journey to Argos. If you want to get away as quickly as possible, collect food and wood to build a transport raft and rush off to Argos. If you don't get sunk by the copper age naval units awaiting you, skip to the next section "Landing on the Peloponnese"

The better way, however, is to prepare thoroughly. The waters are patrolled by Minoan Copper age battle ships and the Messenians keep spamming war rafts. Let your citizen Build a capitol on the small clearing and then start hunting deer at the western tip of the Island. With the first few units of food arriving, recruit another four or five citizen, who start chopping wood.

Pelops' sons are upgradable, but do not do so yet! The little iron you have is needed to age up and to build a few troops. If you haven't yet spent the civilization points from the first scenario, spend them on the 15% pop cap and any upgrades to Melee Infantry (Spear). When all the deer have been collected on the western clearing and the capitol clearing, you should have enough food to advance to the Copper Age. Do so and build a barracks and an archery range. Recruit 4 or 6 macemen. Take two of Pelops' sons and 2-3 macemen and walk east. You will find gold mines and a guard detail of 3 Minoan Bowmen. Dispose of them and send the citizen, who had been hunting deer to mine gold.

Attention: The encounter with the Minoan bowmen triggered the Minoan patrol. Every seven to eight minutes 3-unit Minoan patrols will attack. They will (randomly selected) come from the west (where you started hunting deer) or from the east, where you just killed the Bowmen. The will either consist of Bowmen or Macemen (also randomly selected). The eastern side is already covered. Charge Pelops, his other son and the remaining macemen to guard the western flank. As soon as the first gold trickles in, add 3 Bowmen to each of the guard details.

Make sure you press F11 and keep an eye on the game time. After 60 minutes all hell breaks lose and you'll be overwhelmed, but as long as you're gone by 0:55 minutes, or even a few moments later, all is well - except for the puny little Minoan patrols, who are more annoying rather than dangerous.

To make your start on Argos easier, take two peasants off the gold mine and let them build a granary with two fields on the cramped space behind the capitol. Stone and Iron cannot be harvested on the Island. You'll find them on Argos.

At about 45 minutes game time, build a dock at about the height of the gold mines. Build 2 transport rafts and upgrade them fully (hitpoints and speed, each twice) Simultaneously use all the remaining Iron to build spearmen (max. 15). You may want to build a war ship to distract the Minoan Navy, but you can easily outrun them with the upgraded transports, which saves resources. Now load all your units onto the transports. If you have not enough space on the ships, leave a few damaged units behind. Put them on guard in front of the Capitol. make sure you have at least 7 citizen with you. Now you might wish to save as the next 2 minutes will be slightly hectic.

Landing on the Peloponnese Edit

Take your three transports and go straight north. Do not try to sail as the crow flies towards the highlighted spot on Argos. You would run straight into a crowd of Minoan Battleships. A landing further south is easier. After a while you'll encounter 2 or 3 Minoan battleships and maybe a few Messenian war rafts. If you've taken a battleship escort, send it to engage them. And make a run with the transports. Due to the speed upgrades, they'll easily outrun everything. But beware, they'll give chase.

Once you reach the coast, it might help to slow the game down to half speed (- on the numerical pad). Unload the transports and quickly send the empty rafts back on the way you came. Chasing enemy ships will be fixated on them. That prevents them from shooting at your landing party. Quickly lasso all units and send them to the point on the plateau. Just right click on the flag and let them run for it. While they march up, select all citizen and instruct them to build a settlement, where the flag is. As soon as the foundation for a settlement is set, you have the chance for 5 extra civilization points later in the mission.

The reason for the frantic activity is the following: As soon as you unload your units on Argos, a huge Minoan army will attack your settlement on the small island. What you have to do is to build a settlement before your capitol on the small island is destroyed. If it falls too early, your citizens will build a capitol instead of a settlement on Argos. That, however, means you can only destroy two of the three town centers, which loses you 5 bonus civ-points. Those are, however, not needed to win the campaign, so do not despair if the Minoans raze your Capitol too quickly.

If you managed to build a settlement instead of a capitol, garrison 5 peasants in it to upgrade to a town center. If you have any remaining citizen, let them build a Granary. Make sure to have your units ready, especially the spearmen and Macemen. The Acheans are very fond of sending horsemen and Bowmen to harass you. There are a stable and an Archery hidden away nearby on the beach, which you could try to raze, but that would not change much as those are rebuilt after a while.

Start up citizen training and let them farm or hunt the horses and mine for gold and much needed iron. Stone is available nearby and some of your units could probably use a hospital by now, but use the few units of stone you have to build a temple instead. Train one or two priests. You can use those to try and convert some of the Achean horsemen, since you can't train those yourself.

Once you have food, gold and iron production in place, start building up a balanced army. Since the Acheans keep up their hit-and-run attacks with horsemen and archers, you need some macemen and a lot of spearmen. Also throw some archers into the mix, as the stone age Messenians keep sending spermen your way. Make sure you leave 10 population slots open - for a prophet and 5 samsons. Once you have neough troops, take a few archers, macemen and spearmen and secure the stone mine southwest of your settlement. Then send in 5 or 6 citizen and let them collect stone until you have 300 units. Then abandon the spot and return to your settlement. Now build a hospital and heal all units in need, specially Pelops and his sons. Train a prophet and once his power is at 100% send him accompanied by 10 Macemen and 20 spearmen straight to the west. You will run into a little Achean settlement with no temple around. Let the Prophet take down the town center with an earthquake and mop up any defending troops with your spearmen and macemen.

Return to base and heal/replace injured or fallen units. Recruite 5 samsons and reestablish a new raiding party, consisting of macemen, archers, sampsons and the prophet. Take a few spearmen with you in case you run into an Achean patrol. Move to the southwestern stone mine and due west from there until you encounter the Messenian village. Take out the two towers and the temple with the samsons, while the other troops clear the village of citizen and spearmen. Once the temple falls, have the prophet cast a firestorm or earthquake on the town center.

If you have a capitol on Argos, instead of a town center, the mission will be over, but if you managed to build a settlement before your first Capitol fell, you can now return to base, heal your troops and destroy the third town center (Acheans) in the northwestern region for an additional 5 civilization points. In that case you will have to populate your town center until it becomes a Capitol to complete the mission.

Retrieved from "https://empireearth.fandom.com/wiki/Warriors_From_The_Sea?oldid=9115"
Community content is available under CC-BY-SA unless otherwise noted.