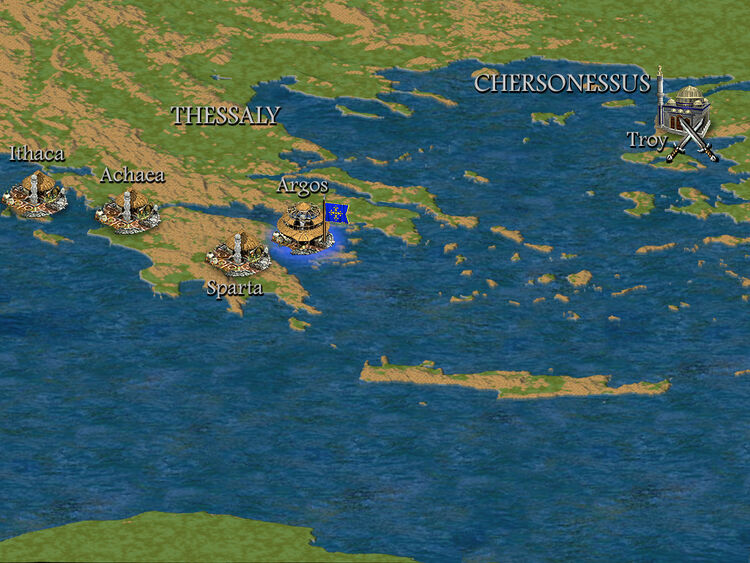 The Rise of Athens

The years have brought trouble to the Sons of Pelops. The wealth of Greece is nearly exhausted. Horse-riding warriors from Thessaly who claim to be the descendants of Hierakles fight to reclaim the land from which they were driven. And piling insult on top of injury, the great city of Troy has abducted Helen, the Queen of Sparta.

Agamemnon, King of Argos, has called for a consultation with his prophet. A goat is to be offered to Athena and its entrails read. But the King feels sure he knows what the goddess will divulge to him:

The city and people of Troy must be made to pay for their affront. Therefore, a siege must be mounted. If successful, perhaps the Greeks can even revive their civilization with the plunder from that glittering city across the Aegean.[1]

The first Greek empire arose in the second millennium BC. Today it is known as the Mycenaean civilization, after the ancient city of Mycenae in Argos which provided most of the early archaeological evidence concerning its existence. That city, first excavated in the 19th Century by Heinrich Schliemann, yielded vast troves of golden vessels, armor and weapons. The digs revealed the Mycenaeans to be war-like conquerors who thrived on plunder and tribute exacted in their devastating raids throughout the Eastern Mediterranean.

But archaeology had come late to the scene. The stories of the Mycenaeans had already been known for thousands of years, for these people were the same Achaeans, Danaans, and Argives who populated the pages of Homer's two immortal epics,"The Illiad" and "The Odyssey." Assumed to be myths or folktales, or even pure fiction created by Homer, scholars for centuries had refused to accept that Achilles, Odysseus, Agamemnon, his brother Menelaus, and the abducted Queen Helen had actually existed. But this all changed in 1871, when Heinrich Schliemann, using only the stories and descriptions contained in Homer's works, was able to locate the site of the historical city of Troy.

Thanks to Schliemann's visionary work and the exhaustive research of the scholars who came after him, we are able to place the Trojan War at about 1250 BC. By this time, archaeological data suggests, the Mycenaen civilization was in decline, under siege from waves of brutal newcomers surging down from the north. One of the most striking pieces of evidence of this is a wall, built by the Mycenaeans of Agamemnon's time, that stretched across the Isthmus of Corinth, clearly intended to keep the invaders at bay.

But these unstoppable newcomers eventually overran and obliterated the great cities of the Mycenaeans, and by 1100 BC Agamemnon's people had vanished from the land. Some scholars even speculate that(this isn't irony so much as good timing) this may have even occurred while Agamemnon and the Argive host were engaged in their ten-year siege of the distant city of Troy. The heroes of the Trojan War returned, it seems, to find their cities plundered and their homes occupied by their northern enemies.

Still, their names and their exploits were preserved in ancient stories. Then, in 750 BC, a blind poet living in Asia Minor wove those tales into unforgettable poetry - epic poems that were remembered and passed down orally for nearly two hundred years before being committed to paper. We now realize how much truth they contained about what transpired in Troy.[2]

This mission lets you play the epic war between the Greek and Troy, as described in Homer's epic Illiad. While following key events of the Trojan war, the scenario contains some historical inaccuracies, such as the fact that the Trojan horse was an idea of Odysseus, not Athena and that the Dorians were never mentioned in the Illiad. Their first literary mention of them is in the Odyssey, which happens after the end of the Trojan war.

- Bring Agamemnon to the other cities in Greece to gather allies for the War against Troy.
- Agamemnon, Menelaus, Achilles, and Odysseus must survive.
- Assault the city of Troy with Agamemnon and his new army.
- Build a Temple in Athena's sacred grotto to secure her divine help.
- Load the Trojan Horse with soldiers and bring it up to the Gates of Troy by itself.

- Agamemnon, Menelaus, Achilles, or Odysseus dies.
- The animals on Chersonesus are killed
- The Trojan Horse is destroyed before it enters Troy.
- Any temple inside Troy's walls are destroyed.

- You have a kingdom to manage as well as a war to mount; so don't forget to put your citizens to work farming and gathering resources. - There are two ways of dealing with the invading Dorians: The town of Doris can be located and destroyed, or a wall can be built across the Isthmus of Corinth (the wide neck of land just north of your Gold mines) to keep them out. - Odysseus is your most clever ally. Make sure he stays close at hand and pay attention to his suggestions. - Unlike their counterparts from the Illiad, these Trojans have a well equipped navy as well as an army. Be prepared to face both. - Your Prophet is more than just a soothsayer. A good dose of Malaria might help avoid 10 years of hard fighting. - Each of the other kings will be providing ships as well as soldiers; so don't forget to look around for them after Agamemnon has spoken to each king.[3]

Attention: Do not read this if you want to solve it on your own

As in the Illiad you first have to rally the Greek kings behind you. But before you set off, set your few villagers to work. Build a granary inside the walls. You can actually build it over the sacrificial pit.

Now let Agamemnon ride out of town west towards Sparta, where Menelaus will join you along with some chariot archers. continue northeast to find Achilles' base and collect him and his soldiers. As a last step sail Agamemnon over to Ithaca where Odysseus will join you. All three kings will ask a specific favor and will give you battleships. Achilles and Odysseus also provide transport ships. Return the ships to your dock south of Agamemnon's village and march your small army back to base. You will now have a couple of elite soldiers and four heroes, two strategists and two warriors. 5 civilization points are awarded for recruiting all kings.

Build up the economy Edit

War is expensive business, so before you you can assault Troy, you need to build up an economy to support the war effort. You will need Iron and Gold and Stone, which are only available from a resource patch north of your village. Unfortunately that resource patch is regularly raided by Dorian marauder groups consisting of Horsemen and Bowmen. Use the iron you have to build up a group Spearmen. You don't need to build Macemen yet as you have several elite sword fighters for that. Send your army to the resource patch. Make sure you split it up evenly to guard both the northern and western flank. Use the strategist heroes to keep your army healthy. Now send 8 citizen each to gather gold, stone, iron and wood. As resources come in, build 5 Sampsons and a balanced army of Macemen, Spearmen and Bowmen. Upgrade all available units to their maximum. Do not forget the battleships.

After a while the constant attack from the Dorians become a nuisance and it is time to teach them a lesson. Take part of your army (mainly Spearmen, Macemen and Sampsons) north. Make sure that you take one of the strategist heroes, the other stays behind at the resource patch with a small guarding force. Walk carefully north. Halfway between the resource patch and the Dorian village are two towers. Take them down with the Sampsons.

Once you reach the Dorian village, do not attack the gate. Send the Sampsons to attack the wall far left of the gate. This avoids that parts of your army run through the gate, which sometimes open shortly for Dorian horsemen. Once the wall is breached, send you army in and raze all the building to defeat the Dorians and gather a bonus of 5 civilization points. Do not remove the little guard at the resource patch yet, as there may still be Dorian marauders about, which were away from the village at the time of the attack. Those would still attack the resource area.

While the citizens continue to fill the resource inventory, take the fleet of war ships and start exploring the sea thoroughly. Troy has 4 groups of Battleships at sea and you need to sink them all to avoid nasty surprises later on. Once you have sunk all 14 hostile Battleships the seas should be clear, but let your ships run about in explore mode for a while to make sure you didn't miss any. Meanwhile, train a group of Horsemen and give them two speed and two hitpoint upgrades. The speed upgrades are vital for the attack on Troy. When you are ready to attack, sink your Battleships and garrison all but 5 Citizens to free up population space. Fill up the space with Archers and Spearmen. Make sure you rebuild any Sampsons you've lost during the attack on the Dorian village.

Load the 5 Citizens and a first expedition force that contains at least one strategist hero onto the transports and sail to a broad beach just north of the Troas ruins and let the Citizens cordon off a small area by surrounding it with Towers. Make sure you update their range. Send the transports back to Greece to get the rest of the army and position it within the towered bridgehead. Make sure you set them all to guard behavior. Now you have to deal with a huge army in front of Troy's gates. For that we'll use the 'taunt-and-chase' tactic. Take a single horseman and ride out towards Troy. Once it has been seen by Trojan units, do an about face and ride back into the towered area. The strategist heroes will heal any hits it has taken. Let your army deal with the units that gave chase to your horseman. Repeat the process until you have lured the whole army group by group into the trap. Make sure that you check on both sides of the gate. There is a fortress on either side and the army is not defeated until Troy has ungarrisoned all units. Overall, you'll have to repeat the 'lure-and-chase' spiel about 7 to 10 times. Once the air is clear, take Odysseus and the Sampsons and bang away at the left tower next to the gate.

You will soon realize that the walls of Troy are too sturdy to be breached by burly men with oversized tooth-picks. After a spontaneous pow-wow Odysseus suggests to build a temple for Athena in a nearby sacred grotto to win her support. Ship the Citizens to the nearby peninsula to build the temple and return them. Make sure they don't kill any deer or you'll fail the mission. Athena gives the Trojan horse to them. Fill it up with all four kings, the elite warriors and the Sampsons. Bring the horse in front of the gate. The Trojans will bring it in and once the night falls, unload it. Now you must be very careful to herd your troops: let all warriors attack King Priam, ignoring the other troops, while letting the Sampsons attack Priam's palace. Make sure that no warrior or Sampson attacks any temples. If they do, you break your promise to Odysseus and fail the mission. Once Priam has been slain and his palace razed, you have won the Trojan War.

Retrieved from "https://empireearth.fandom.com/wiki/The_Trojan_War?oldid=9116"
Community content is available under CC-BY-SA unless otherwise noted.