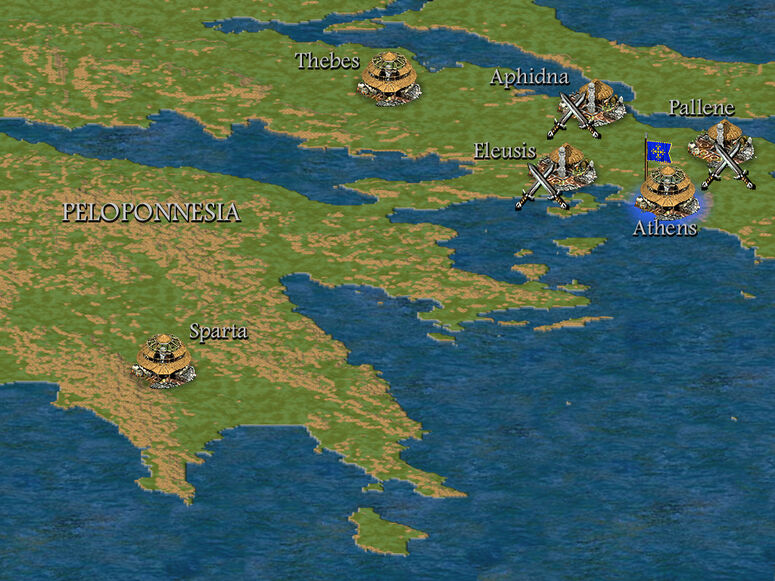 The Rise of Athens

The Sons of Pelops were long gone. But north of Argos, on the Saronic Gulf, their descendants continued to rule in the city of Athens. Though at first little more than a sleepy village, Athens was poised to take control of the entire Attic Region.

No one believed in that vision of Athens more strongly than her king, Theseus.

Theseus has assembled the leader of Athens at the Hill of Ares. Here, he will share his plan for expanding the city... one that he hopes will secure forever the future of Athens.

The legendary Greek city-state is about to emerge.

Around 750 BC, the blind poet Homer appeared in Asia Minor, near the site of ruined Troy, and recorded the tales of the Sons of Pelops in immortal verse. In the following century, even more reliable historical accounts chart the rise of Greece's three most important city-states: Athens, Sparta, and Thebes.

The People of Athens were descended from those who survived the onslaught of the Dorians. They saw themselves as the inheritors of the heroic tradition preserved in Homer's poems.

Spartans and Thebans, however, were descended from the Dorian horde who overran Homer's heroes. Hailing from the region of Thessaly, these Doric races traced their own ancestry back to Herakles, son of the demi-god Perseus. Indeed, the Spartans sometimes referred to themselves as the Sons of Herakles.

The Athenian King Theseus falls squarely in realm of mythology. He may have existed, but we don't know for certain. We do know that the struggle to unite all of the Attic Peninsula under one city, Athens, was paramount to her rise to glory. And as the city became more powerful, she had to deal with successive generations of tyrants who first seized control in the sixth century. In fact, democracy was invented in Athens to prevent future tyrannies from arising.

But Sparta and Thebes - traditional and conservative - found this new form of government to be an unacceptable threat. Together they launched an invasion of Athens. By defeating them in pitched battle, Athens proved once and for all that she would not be denied a place among the greatest cities.

The age of Athens had arrived.

Only the first objective is visible at the beginning of the scenario. The rest follow as the scenario progresses

Send five Citizenss to build a granary within the city's gates. Send the rest to gather wood from just outside the eastern gate and be sure to queue five more Citizens as well. Once you have trained five Archers and five Macemen send your entire army(including Theseus and your priest) to attack Pallene's army. Once you have done that send Theseus to the their capital to gain their city. 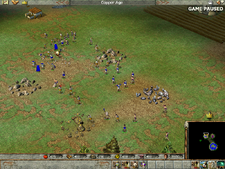 Once conquered, Pallene will offer a tribute of gold and iron which you should use to add another five units each of archers and macemen to your army. Once added, attack the army of Aphidna( which is larger than Pallene's and consist of Spearmen and Macemen) and be sure not to lose any of your nobles or Theseus. As soon as they are annihilated, send Theseus to their town center. Since by now your army will be badly wounded, generate ten Citizens and send them up to a build a Hospital and a Settlement near the resource patch near Aphidna. When your Citizens have finished, have them to mine Stone which you will need later on.

Once you have added five more Archers and Macemen and your wounded have healed, send your Army to Eleusis and use a flare above it to signal for aid from your allies. Be sure to attack Eleusis from the north-eastern gate as it will be easier to enter the city that way. Be sure Theseus is near Eleusis's Town Center while attacking as you don't really have to destroy their whole army to get them to surrender. Have your wounded once again retreat to your Hospital in Aphidna

Now that you have the alliance of the three cities, DO NOT send Theseus back to the city yet, for as soon as he does, the mighty armies of Sparta and Thebes will come crashing down on you. First, construct two Towers near the Theban border flag (be sure not to get too close) and two Towers right next to Attica's eastern gate where the Spartans will attack from and upgrade their range. Then train a Prophet and station him just behind your towers near the Theban border. After that, train another ten Macemen and Archers and have them rendezvous with the rest of your army alongside your prophet. Don't worry about who'll defend against the Spartans. When all your preparations are complete, then you can send Theseus in to the Temple of Athena. Straight after Theseus is taken up to Olympus Sparta and Thebes will declare war on you.

When the Theban army attacks, wait until most of them are near the towers and then use your prophet to send malaria upon them. Draw him back and finish off the Thebans with your own army. Your allies nearby will aid you. Send your army back to Athens as soon as the Thebans are finished, for by this time the Spartans will be advancing upon your city. Do not panic, for as soon the Spartans are sighted, EVERY SINGLE UNIT your allies possess will be sent to defend Athens. Once the Spartan army has been defeated, you will have won The Rise of Athens.

Retrieved from "https://empireearth.fandom.com/wiki/The_Rise_of_Athens?oldid=9117"
Community content is available under CC-BY-SA unless otherwise noted.