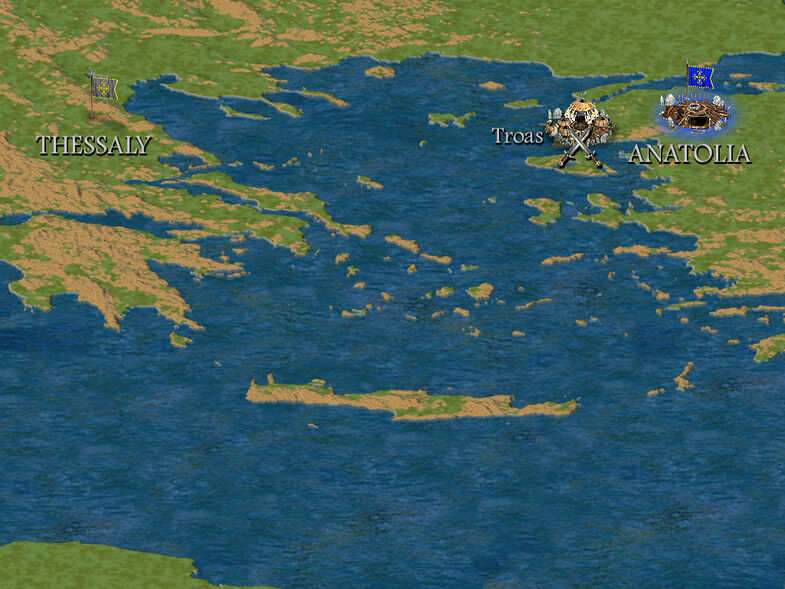 A cold wind blew off the Anatolian mountains. In the foothills below, the young tribal chief, Hierakles, looked over the remaining members of his fading village. Despite their courage, they appeared ragged, tired. He knew they would not last through another bitter winter if they remained here. But where was there to go?

Thank the gods! The village shaman, Kalkas, had the answer. It was why he had gathered his people here today.

In a recent dream, Kalkas had envisioned a way to traverse the western sea. He believed the Anatolian people could cross the water to a land called Thessaly, and there they would prosper. Now, it was time for Kalkas to share his wisdom. The legendary story of the Greek people begins here.

The Balkan Peninsula was inhabited by humankind as early as sixty or seventy thousand years BC. These first paleolithic peoples, however, were pushed aside by aggressive migrants from other parts of Europe and Asia. It was these later arrivals who would come to be known as Greeks.

The first important wave of Early Helladic people probably journeyed from Anatolia, which is in modern-day Turkey. They settled in Thessaly, Boeotia, and Argos - but they were not permitted to do so unmolested. Considerable archaeological evidence suggests that they were attacked over and over by marauding invaders from the Danube region who probably introduced horses to the area. Ironically, thanks to these raiders from the north, Thessalonians eventually became masters of the horse themselves. For centuries thereafter, Greeks looked to Thessaly to provide them with mounted fighting men.

For protection in the short term, the Early Helladic people in Thessaly built the first fortified hill-top towns in Greece. Possibly they learned the techniques for doing this in Asia Minor, where settlements in Troas - the future site of Troy - had already experimented with building fortifications.

All Greek cities eventually adopted the custom of building fortifications situated on a walled-in hilltop. This "high-city," or "acropolis" as it came be called, is one of the hallmarks of ancient Greek civilization.  The acropolis of Athens, crowned by the glorious Parthenon, has endured since the 5th Century BC as the quintessential example of this custom.

(Each objective after the third is invisible until the one before it has been completed.)

Warning: Do not read this if you wish to solve this on your own.

Have four of your six Citizens to start harvesting Food from the goats in the village area, while the remaining two build a Barracks and after that send them to chop trees. Train four or five Clubmen and send them with Hierakles and Kalkas to the Gold and Iron mines south of your village. The Troans will attack this patch every few minutes with two Clubmen, but since you have twice the amount of Clubmen as well as Hierakles as a strategist hero (he will heal injured units), they do not pose a danger.

Once you have collected 750 units of food, advance to the Stone Age. If all goats near the Town center have been killed, you can find two small flocks of goats in the forest north of your village and another flock to the south east. Another flock can be found in the resource patch, where you "parked" Hierakles and his Clubmen. After the Stone Age has been reached, train a few more Citizens had have them harvest gold and iron. Three for each patch should suffice, if you're not in a hurry. Use the Gold and the Iron to build seven to ten Spearmen and three Sampsons. Collect more Iron and Gold to upgrade your units - hitpoint, attack and armor upgrades for the infantry units. You may want to upgrade the Sampsons' speed, so that they won't lag behind the rest of your army, when approaching enemy territory.

When you have 10 Spearmen (or add more, if you want to have an easy time), march along the way south from the resource patch. Advance carefully to avoid running into the attack area of the Towers that guard the entrance to Troas. Send your Sampsons to attack the first tower and make sure to have Hierakles nearby to heal the Sampsons, which are under fire from both Towers. Troas will send out Clubmen and Rock Throwers to defend the towers. Let the Spearmen mow down the Clubmen, while your own Clubmen make short work of the Rock Throwers,

Once the two Towers have fallen, send your army into the village and kill the defending troops. Send the Sampsons to take down the Temple. Once it has been destroyed, let Kalkas throw a match at the town center Firestorm. When the house cleaning in Troas is complete, leave the city through the south entrance and let your Sampsons attack the two Towers that guard the Dock. Make sure that your units do not attack the Dock. There are some Clubmen defending the dock, so make sure you brought some Spearmen. Do not try to destroy the Towers with a Firestorm! The Dock would be destroyed as well. Bring Kalkas near the Dock, when the Towers have fallen. The Dock will be handed over to you.

Immediately position your Clubmen in the shallow waters around the Dock. The sneaky Troans have two War Rafts hidden away near the dock and they will attack as soon as you steal the Dock. Keep Hierakles nearby for healing, while the Clubmen hack the attacking rafts to shreds.

After disposing of the two War Rafts build a Transport Raft and fill your army to the population limit with Spearmen. Upgrade the Transport with two speed and two hitpoint upgrades and maneuver it to explore the sea south of Troas. Deep in the south the Troans have hidden another two War Rafts, near the area where you are supposed to land. Once they attack your Transport Raft, make an about-face and hurry back to the dock. Due to the speed upgrade the raft can easily outrun the Troan War Rafts, who will chase it back to Troas. Position it near the Clubmen, but make sure it is within dock range. The War Rafts will stubbornly attack the Transport, ignoring your little army. Let the ClubmEn have a whack at them.

When all four Troan War Rafts are destroyed there is nothing to fear anymore on the sea. Build additional Transport Raft or start shuttling your army with a single raft. For safety reasons you should let Kalkas and the Citizens stay home for the moment. Let your army land on the southernmost tip of Thessaly. Once your army is assembled, start scouting the area carefully and thoroughly. The Dorians have about 10 Horsemen in groups of three or four hidden in forest pockets throughout and around the area of the new acropolis. Let your Spearmen have a stab at them and support them with Hierakles' battle cry.

Ignore all the claptrap about building structures on the acropolis, if you want to get 10 additional civilization points and want to avoid the Dorians attacking you every few minutes. Move your army north until you wander into the Dorian village. Let the Sampsons attack the Stable at the entrance and the second one in the northwestern corner. Meanwhile, let the Spearmen deal with the domestic Dorian defence force, which entirely consists of Horsemen. Mop up the remaining buildings and any remaining Dorian Citizen and you'll have peace in Thessaly.

Move your army back to the acropolis and make sure to scan for any remaining Dorians. Now transfer Kalkas and a few Citizens to Thessaly and have them build a Barracks and a Settlement on the acropolis. Listen to Kalkas' speech and build a Temple, too. You have won the scenario.

Retrieved from "https://empireearth.fandom.com/wiki/The_Early_Helladic_People?oldid=9114"
Community content is available under CC-BY-SA unless otherwise noted.