Molly Ryan is a character from the Russian campaign in Empire Earth. She is also the "strategy" hero for the Nano Age. (XIV)

Molly Ryan was toughened by her upbringing. Both her parents had been in the military, and she grew up in bases across the globe. Often the "new kid" at school, Ryan learned to defend herself when necessary. At the Age of 9, she hospitalised a 15-year-old bully who had been terrorising her and her classmates. The boy was in intensive care for 6 days, but the authorities accepted that it was self-defence and the assault charges against young Molly were dropped.

Ryan graduated from school with honours and immediately followed her parents' lead by entering military service. She spent 3 years in the United States Marines Corps, earning two promotions, as well as a commendation for planning and leading the assault into Libya that recovered four stolen nuclear warheads. In 2090, Molly transferred into the special services.

The next several years were spent much like her childhood, without a permanent address or permanent friends. But Ryan accomplished every mission she was given, finding herself once again at the top of her class. During an assignment in the Middle East, Ryan infiltrated a terrorist group and stopped a smuggling ring dealing in high-energy weapons. She was captured and held briefly, but managed to escape. After that close call, Ryan decided to take a break and went into semi-retirement. But she always stayed in shape, ready to return to active duty if her country needed her.

During Grigor II's takeover of Cuba, Molly Ryan was stationed in the southern United States and had control over both a large navy and some Missile Bases. She met with the Russian traitor, Sergei Molotov and decided, against her better judgement to ally with him, after Molotov presented to her the plans for the Time Machine. Molly and Molotov then had to take back Cuba in order to build the time machine that would allow them to travel back to 2018 and kill Grigor Stoyanovich before Novaya Russia became a reality, ensuring that Grigor II would never rise to power and kill millions in his world conquest. Her fate, along with Molotov's is left unclear after they stop Grigor II and kill Grigor. 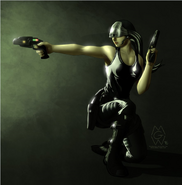 Add a photo to this gallery
Retrieved from "https://empireearth.fandom.com/wiki/Molly_Ryan?oldid=8695"
Community content is available under CC-BY-SA unless otherwise noted.