Start a Wiki
It is a civilzation in Empire Earth 3.

The Middle-Eastern specializes in cavalry units and excels at the element of surprise as well as hit and run tactics. They are a mobile faction which can pick up and move most of their buildings to relocate or set up a forward base. As the Masters of Mobility, this faction primarily relies on, and is excellent at, ambush, harassment, and raiding. The Middle East cannot build walls or towers, but their fortresses are strong and also provide room for their population. In the Future, the Middle East fields a number of clever modifications to traditional (and not-so-traditional) weapons.

The Middle East has the unique ability of producing buildings exclusively inside its City Centers. Once purchased and produced, the building rolls out onto the battlefield in mobile cart form. The cart can then be ordered to move to a desired destination and deploy (unpack) into building form. Most buildings can also be re-packed and moved to a new location.

The Middle East cannot construct walls or towers, but can construct Fortresses for defense, as well as to increase its pop cap.

The Middle East must build Fortresses, which are sturdier than the West’s houses, to increase its population limit. 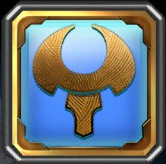 Add a photo to this gallery

Retrieved from "https://empireearth.fandom.com/wiki/Middle-Eastern?oldid=7790"
Community content is available under CC-BY-SA unless otherwise noted.