Created by genius Roboticist Dr. Alexi Septimus, and gifted to Grigor Stoyanovich to serve as a bodyguard when the Doctor was recruited by Novaya Russia.

In the years to come Grigor's faith in his mechanical companion had grown so strong, that when the time came to select an heir the now old Grigor, named the Robot his successor. Dubbing him Grigor II he was upgraded with the latest technology to grant him sentience, taught by his Master everything he know of war and statecraft. As well as knowledge of every great leader in history as well, from Alexander to Bismarck, all to fulfill Grigor's dream of a global Empire.

Such a bold declaration was met with doubt from Russia's citizens and even treachery from its officials. Fortunately the Grigor's where warned by a loyal army Lieutenant, Sergei Molotov, and the coup was crushed. Though the elder Grigor died shorty after, Grigor II assured him in his final moments that he would continue his Masters work.

With Molotov as his right hand, Grigor II set his sights on the last major obstacle to Novaya Russia on the continent, China.

During this campaign they discovered a plot to undue their nations very existence. The Chinese where building a Time Machine to go back and eliminate the first Grigor before he could found Novaya Russia. Sending in Major Molotov to steal the plans for the device succeeded, but the man had absorbed too much radiation from the device in the process. Unwilling to loose such a valued soldier, Grigor II had Sergei converted into a Cyborg, saving his life while ignoring that to a horrified Molotov's mind this removed part of his humanity,

A couple years later he would again test his right hand by sending the now, General, Molotov, to subjugate Cuba in preparation for their invasion of the United States, by taking a Que from Cortes and remotely sank the ships that had delivered Molotov and his forces there.

Once Molotov reported he had succeeded, Grigor would finally go too far and set into motion his own end by ordering the extermination of Cuba's population, a sum total of 18 Million, coldly dismissing the number as: Too large to control but too small to waste time governing. Causing Molotov to defect and share the Time Machine plans from China with US Agent, Molly Ryan to aid their own temporal research.

While he eventually able to overwhelm their forces, the two escaped into the past and Grigor II followed, cleverly setting the machine so he'd arrive before them bringing the superior technology of their era with him, intending to speed up Novaya Russia's timetable with his Master. Despite the advantage, Molotov and Ryan's conventional forces where able to defeat the colossal machine and prevent the terrible future he had built.

"Bismark once said, the issues of his day would be solved with blood and iron, it seems we must solve ours with iron alone."

"There is only the state, and those outside the state." 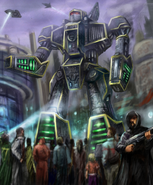 Russian Campaign Mission Menu Art
Add a photo to this gallery
Retrieved from "https://empireearth.fandom.com/wiki/Grigor_II?oldid=8172"
Community content is available under CC-BY-SA unless otherwise noted.