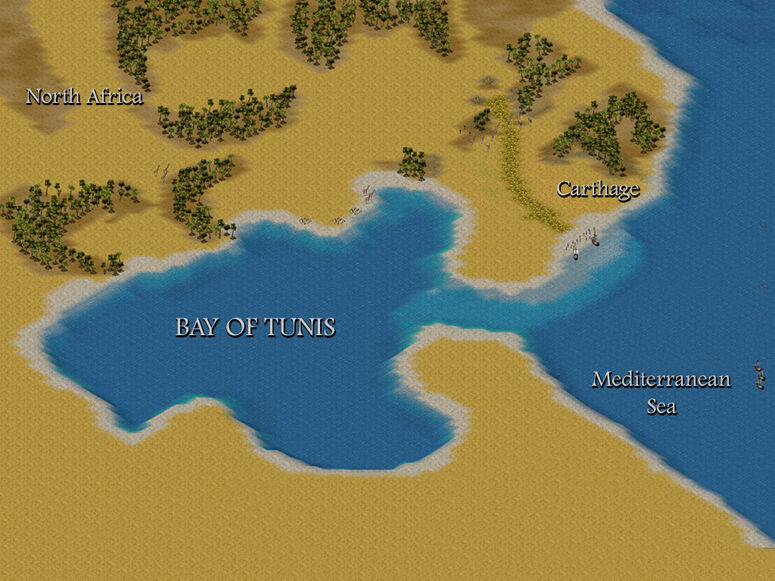 The Building Up scenario is the fourth part of the Learning Campaign which introduces the player to hunting, fishing, farming and mining in Empire Earth. You will learn how to upgrade Settlements into Town Centers into Capitols by populating them. You will also learn how to construct Granaries and Temples.

Phoenician trade has spread throughout the Mediterranean. But Greek raiders are threatening merchants bound for the distant colony of Gades, in Spain.

You have been given the important task of establishing a safe haven for Phoenician traders in North Africa. Colonists have been provided and you must build up the basic infrastructure of a city that us to be called Carthage. By following your advisor's instructions, you will learn to develop Settlements into Town Centers, and then into Capitols.

By the 9th Century BC, Greek colonies in Southern Italy had emerged as important powers in the region, and armed raiders began to harass Phoenician trading vessels.

Tyre responded by sending colonists to North Africa, to establish there a secure port for her merchants.

The Greeks came to know it as Carthage.

Carthaginians give the traditional founding date of the city as 814 BC, though archeological evidence suggests this date may be a little too early. In any case, Carthage was destined to become a mighty empire in its own right, standing for hundreds of years. The city of Carthage was ultimately destroyed by Rome in the middle of the 2nd Century BC, at the end of the Punic Wars. But, 100 years later, Romans rebuilt the city.

This scenario is pretty easy as there are no enemies in this scenario. You start by building a Capitol near the blue flag on the hill. Then you must build a Granary, and the surrounding farms, within the city limits. After that you must build a Dock on the shore then a Temple near the Capitol. You then must build two Settlements, one near the Stone mines and the other near the Gold. You must upgrade both of them into Town Centerss by populating them with Citizens. Once they've been upgraded, you will then be given a lot of citizens to either help populate your Town Centers into Capitols or get Resources faster. Once you have 100 units of Stone and Gold, the scenario will be completed.

The Granary
Add a photo to this gallery
Retrieved from "https://empireearth.fandom.com/wiki/Building_Up?oldid=9176"
Community content is available under CC-BY-SA unless otherwise noted.